In order to understand what may happen in future eruptions, volcanologists look at what happened in previous eruptions. How big were they? How much ash or other volcanic debris erupted? How far did the volcanic products travel? The idea is that the same processes driving volcanism in the past will be the processes that create volcanism in the future. Unfortunately for us in Auckland, much of that information is now covered by houses or roads, or has been destroyed for city-building.

Google Earth map of Auckland, showing the vast areas where the city has been built up over volcanic deposits, making it very difficult to study the field nowadays.

Map of the Auckland Volcanic Field showing the extents of eruptive products from the volcanoes, much of which is now covered by the city. Map by Les Kermode.

Fortunately, we have a lifeline…

Rigorous scientific study of Auckland’s volcanoes dates all the way back to the 1850’s. New Zealand had just been recognised by the British Empire as a colony, and already, dedicated and adventurous naturalists and geologists were spending many miserable, dangerous months at sea in order to explore our fascinating landscape, full of steaming ground, bubbling mud pools, and other previously undocumented, stunning geologic features.

Though controversial in authorship credit (see also the fascinating article penned by Grenfell in the July 2013 GSNZ newsletter, pg 15), the 1864 map below is the one that most people think of when they refer to the earliest map of the Auckland Volcanic Field. It is certainly a gorgeous map! Not only is it nice to look at (esp. on my favourite Hochstetter map mug), it tells us the story of the field before the city was built on top of it. It is chock full of geologic information and clues that have since been lost to the subsequent century and a half of quarrying, road building, and other modifications. 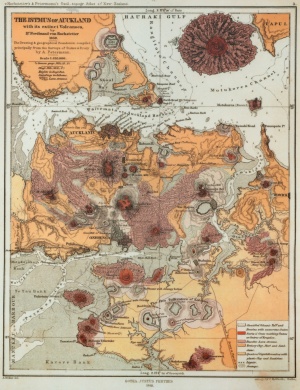 The isthmus of Auckland with its extinct volcanoes, by Dr. Ferdinand von Hochstetter 1859. In: Hochstetter and Petermann, Geological and topographical atlas of New Zealand: six maps of the provinces of Auckland and Nelson. Auckland: Delattre, 1864. Map 3.

Since the field nowadays has largely been covered in asphalt and concrete, I cannot emphasise enough how invaluable these kinds of early maps, photos and sketches, and accompanying descriptions are to us as researchers. The history of the area you are researching shapes your project, and the tiniest bit of information can change everything. This history, for the Auckland Field, comes from physical items like the first map above, but also from the people, the scientists, who have been working in and on the field for the past century or more.

A few notable past Auckland geologists include Ferdinand von Hochstetter, Les Kermode, and the author of the book that inspired the title of this blog, Ernie Searle. Even though these and other Auckland geologists have since passed on, their legacy remains. Their knowledge has been passed down to those that are our experts today. These valuable people hold the history of Auckland Volcanic Field in their heads, hearts, and numerous files, just as their mentors did. They generously sacrifice their free time and energy to painstakingly archive information that isn’t suitable for preservation within professional publications, but is nonetheless extremely valuable. They also share their insights with new and upcoming AVF researchers to ensure that priceless tidbits are not lost to the ages and that time is not wasted by re-answering an already-answered question. Their expertise and knowledge is invaluable, and this blog post is my love-letter to each of them.

Ferdinand von Hochstetter, one of the first geologist to study and document the features of the Auckland Volcanic Field, in his cabin aboard the Austrian ship Novara. Engraving based on a sketch by Joseph Selleny, c. 1858.

I cannot recount the number of times that I have exhaustively searched the literature for a bit of information about an Auckland volcano, only to have a fellow learned researcher immediately supply the needed piece of the puzzle based on a (well-documented) memory. Or the times that another researcher has mentioned a source for a volcanic rock sample that no one else knew about, and would be nearly impossible to find on my own. Sometimes, the information comes from a remembered conversation with a since-passed geologist! These earlier geologists knew to note and discuss observations, and the current experts take careful note of these conversations, as you never know what may become important later on. Given the state of my own memory, I’m flabbergasted by how much knowledge has been preserved, and I bow down to my geologic elders.

How could any geologist NOT want to emulate a guy who poses with his rock hammer in portraits?! (Source: Hamel, Bruno. (1859) Dr. Ferdinand Hochstetter. Auckland War Memorial Museum – Tamaki Paenga Hira. PH-ALB-84p1.)

In many ways, our success as scientific researchers relies on this careful recounting and remembering of the past, just as native peoples depended on it to preserve their experiences and life lessons through generations, or as a family may recount anecdotes to keep the memory of a loved one alive. Because, in life as well as in geology, understanding, appreciating, and learning from the past is the key to surviving and thriving in the future.